About two weeks ago New Testament scholar Scot McKnight interviewed me about my recent book Abraham’s Silence: The Binding of Isaac, the Suffering of Job, and How to Talk Back to God (Baker Academic, 2021). 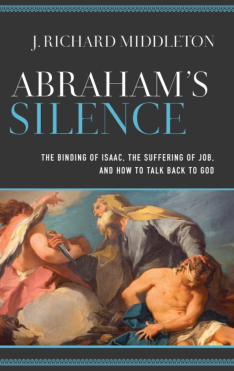 In the book I suggest that we have misunderstood the nature of the test God gave Abraham in Genesis 22 and that Abraham failed (or barely passed) the real test. I argue that the test was not whether Abraham would obey God, but whether he could discern that God’s character as merciful (that is, God wanted Abraham to realize that he didn’t really require child sacrifice).

The way Abraham would have shown that would have been by protesting the command God gave him to sacrifice his son; he should have interceded on behalf of Isaac. And God would have granted his request.

Of course, this goes against much traditional interpretation of Genesis 22. So if you want to understand why I read Genesis 22 differently, you might be interested in the podcast.

The podcast is now available on a variety of platforms, including Soundcloud, Apple Podcasts, Spotify, Podbeam, etc.

It was one of the more enjoyable podcast interviews I’ve done.

This is the description Scot has of the interview on the “Kingdom Roots” website:

It is traditional to think we should praise Abraham for his willingness to sacrifice his son as proof of his love for God. But have we misread the point of the story? Is it possible that a careful reading of Genesis 22 could reveal that God was not pleased with Abraham’s silent obedience?

Richard Middleton provides a fresh interpretation of Genesis 22 and reinforces the church’s resurgent interest in lament as an appropriate response to God. Belief in God doesn’t mean you’re forced to say what you think God wants you to say. God can and wants to hear your raw and honest requests.

Scot previously wrote a blog post about the book (and the upcoming podcast), called, “Was Abraham a Good Example?” I reposted it on my own blog site.

If you listened to the podcast, I would be interested in comments.

Here is a blog interview that New Testament Professor Nijay Gupta did with me last year for part of a series he was posting on Old Testament scholars.

Why do you love teaching and researching about the OT/HB?

I find the Old Testament to be rich, complex, and textured—in its literature, its theology, and its earthy spirituality. The literature is so varied (from creation texts to prayers of lament, from wisdom treatises to narratives about the ancestors of Israel and the rise and fall of the monarchy), it’s impossible to get bored with it. One of the great challenges for those who teach the Old Testament is that it is impossible to “master” it. You develop various areas of expertise, but there is always so much more that you have to learn.

What is one “big idea” in your scholarship?

I think I have two big ideas, or at least two emphases, that I hope I have been able to communicate in my teaching and writing. When I started teaching at Northeastern Seminary, the Dean suggested I take the title Professor of Biblical Worldview and Exegesis, since these were my twin emphases.

The first emphasis that I want to communicate is the big picture, the story of the Bible from creation to eschaton, which is the story that ought to make sense of our lives (the trouble is that many in the church have “lost the plot”). So the big picture can help reorient the church to its vocation (the missio Dei), how it is called to contribute to the unfolding of God’s purposes for the world God loves. For me, this has meant a focus (initially, at least) on creation texts, whether in Genesis, the Psalms, Job, or the prophetic literature. Creation is the founding moment of the biblical story and studying these texts helps us see God’s original intentions for humanity and the world, which have something to say about the telos or goal of salvation.

The other big idea that I want to communicate (and model) is that careful reading of the biblical text yields wonderful theological and ethical results. I’ve tried to show precisely that in exegesis courses that I teach on Genesis, Samuel, Job, and the Psalms. This means reading with an inquiring mind, wondering why the text says what it does, and why it says it in the way that it does. It means bringing the entirety of who we are to the study of the Bible, including our hopes, our doubts, our assumptions, our questions, and being willing to challenge the text—so long as we are willing to be challenged in response. The Bible is not a safe book; it can radically change us.

Who is one of your academic heroes and why do you admire them?

My first academic hero is Walter Brueggemann. Although I haven’t always agreed with Brueggemann (I’ve written an article critical of his creation theology, and he graciously accepted my critiques), his attempt to bridge the gap from the ancient biblical text to the contemporary world has inspired me to try and do the same. He particularly opened up to me the riches of the prophetic literature and the Psalms.

What books were formative for you when you were a student? Why were they so important and shaping?

When I was a graduate theological student, it was Brueggemann’s books that deeply impacted me—first The Message of the Psalms: A Theological Commentary, then The Prophetic Imagination. I still assign them in courses.

The Liberating Image: The Imago Dei in Genesis 1

A New Heaven and a New Earth: Reclaiming Biblical Eschatology

I would probably talk about music—especially reggae (both from my home country and “world reggae”) and the music of Bruce Cockburn and Leonard Cohen.

What is a research/writing project you are working on right now that you are excited about?

I am now finishing the final chapter of a book on the Aqedah (Genesis 22) for Baker Academic. It’s called: Abraham’s Silence: The Binding of Isaac, the Suffering of Job, and How to Talk Back to God. It’s a theology of prayer for a time of suffering, developed through interaction with biblical texts (the only way I know how to do theology).

For those interested, there is a recent review of Abraham’s Silence, called “Revisiting the Sacrifice of Isaac.”

New Testament scholar Scot McKnight wrote a blog post on my book Abraham’s Silence: The Binding of Isaac, the Suffering of Job, and How to Talk Back to God (Baker Academic, 2021). The post doesn’t cover the entire argument of the book; it focuses on the concluding section that addresses the Aqedah or Binding of Isaac (Genesis 22). The blog was posted this morning.

Scot also interviewed me about Abraham’s Silence for his Kingdom Roots podcast; we covered a bit more of the book in the interview, including my motivation for writing it and why lament or protest prayer is important in the Bible and the Christian life. I’ll post a notification when the podcast is available.

“Was Abraham a Good Example?”

Gen. 22:1   After these things God tested Abraham. He said to him, “Abraham!” And he said, “Here I am.” 2 He said, “Take your son, your only son Isaac, whom you love, and go to the land of Moriah, and offer him there as a burnt offering on one of the mountains that I shall show you.” 3 So Abraham rose early in the morning, saddled his donkey, and took two of his young men with him, and his son Isaac; he cut the wood for the burnt offering, and set out and went to the place in the distance that God had shown him.

The challenge is for the reader and can be asked in a question:

Why the silence? (In those italicized words.)

Protesting and lamenting sin and injustice are thoroughly biblical. Why the silence? 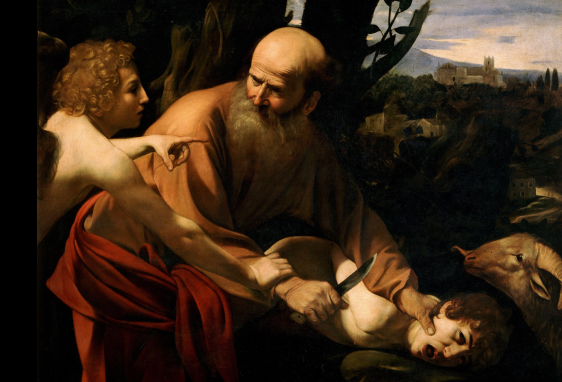 So many gaps in Genesis 22. So many questions. Our imaginations are stimulated to the highest levels in reading this chapter. Intentionally so.

Long ago I learned from reading Meir Sternberg and Robert Alter to ask about the textual gaps in such texts, and J. Richard Middleton explores all the gaps in Abraham’s Silence.

The details are so many that only a sketch can be given here. What I want to do is give you the big ideas of what Middleton thinks of the silence of Abraham.

In this text it is “God” (Elohim) not YHWH who tested Abraham. This is unusual, and could be a distancing expression. A messenger of YHWH, however, stops the sacrificial act (cf. Gen 22:1, 11). Why the change?

Isaac’s relationship to Abraham, or vice versa, is plumbed at length in this book: in essence, he thinks their relationship is dysfunctional as measured by the textual details. They do not talk on the way there; and Isaac all but disappears after this event; he does not come down the mountain and does not accompany Abraham back. Isaac’s not given a separable story in Genesis that we do find with Abraham, Jacob, and Joseph. Middleton suggests Abraham favored Ishmael over Isaac; he thinks Isaac picks up the idea that God is the One to be feared (all this comes from his careful reading of the text). And “whom you love” he thinks could be translated “You love him, don’t you?”

Perhaps most provocatively, Middleton thinks God is testing Abraham about whether he loves this special son Isaac.

Abraham’s narrative arc in Genesis: What view of God did Abraham have? In Genesis 18 Abraham whittles it down to 10 survivors but Middleton thinks he does this in a way that does not plumb the depth of God’s mercy, love, and grace.

Middleton sees problems in the traditional reading: (1) How is this a model for commitment? (2) Why did Abraham need to happen? There is no clear evidence of a special relationship of Abraham and Isaac.

Middleton thinks Abraham is being given an opportunity to prove his love for his son. He could have spoken up but he is silent. Then Isaac all but disappears. Even more, Abraham is being tested about his perception of God’s own character. Isaac ups the ante from Lot to Abraham’s own son. Abraham is silent.

Isaac learns not that God is a God of grace and mercy but one to be feared. Notice “the God of Abraham and the Fear of Isaac” (31:42).  Isaac is distanced from his father from this point on; Sarah, too, is never close to Abraham – perhaps not even living with him – from this point on.  It is a “broken family.” It was not Abraham who stopped the knife but an angel sent by the covenant God.

A big challenge to Middleton’s view are the words of the angel that seem to confirm Abraham as exemplary (not to ignore the positive view of Abraham’s Aqedah in much of Judaism and the NT). He probes how to see these words.

“By myself I have sworn”: God steps in because Abraham’s response was not as complete as it could have been. He thinks the ram was behind Abraham and, quite provocatively, he is not convinced Abraham had embraced the idea of God providing a ram instead of his son.

A sketch, for sure, without all the details, but you can get the big ideas from the above.

Middleton thinks Abraham did not in fact pass the test of Genesis 22. He could have protested for his son and his love for his son; he could have interceded; he could have had a more robust faith in God’s provision; he thinks he “just barely passed the test” of God’s character.