This is the second in a series of blog posts where I’ll outline the argument of my new book, Abraham’s Silence: The Binding of Isaac, the Suffering of Job, and How to Talk Back to God, which is scheduled to be published by Baker Academic this fall (October or November 2021).

This is a follow-up to my post called, Abraham’s Silence–Why Genesis 22 Has Been a Puzzle to Me.

Models of Vigorous Prayer in the Bible

Although my book Abraham’s Silence is explicitly focused on interpreting Genesis 22 (known as the Aqedah or the Binding of Isaac), the book begins by examining how the Bible views the realities of suffering and especially how it affirms the validity of our challenging God about suffering, in bold prayer.

After an introductory chapter (called “Does Abraham’s Silence Matter?”), Part 1 of the book addresses “Models of Vigorous Prayer in the Bible.”

This section includes two chapters, one on the existential power of the lament palms as Israel’s normative “protocol” for processing personal and communal pain in relationship with God (chap. 1: “Voices from the Ragged Edge”) and one on the intercession of Moses and the prophets on behalf of Israel, when God was about to bring judgment on his people (chap. 2: “God’s Loyal Opposition”).

Lament Psalms and the Processing of Pain

My problems with Abraham began when I discovered the lament psalms.

I starting studying and teaching the lament psalms many years ago, after having gone through a time of personal darkness. I lost my way in life and began to doubt God’s goodness.

As a result, I stopped praying; this wasn’t intentional on my part. But I now realize that it was a natural outcome of the fact that I was unsure whether God was trustworthy.

So I found it immensely encouraging to learn about the lament psalms. Fully a third of the psalms in the Bible are laments or complaints, prayers from the ragged edge of life that articulate pain honestly to God. These prayers not only complain to God, but they ask for redress.

Lament prayer revitalized my faith at a time when it was imperiled. Ever since then, I’ve been teaching the lament psalms as model modes of prayer for sustaining our relationship with God in difficult times.

Along the way, I wrote a short meditation on lament, called “Voices from the Ragged Edge: How the Psalms Can Help Us Process Pain” (1994). I expanded this meditation for the chapter on lament psalms as a resource for developing and sustaining a robust life of faith.

Moses’s Boldness before God at the Golden Calf

And then there’s Moses, who interceded for Israel after the idolatry of the Golden Calf—and thereby prevented God from annulling the covenant and destroying the people (Exodus 32–34).

This is how Psalm 106:23 remembers the incident:

“Therefore [God] said he would destroy them—
had not Moses, his chosen one,
stood in the breach before him,
to turn away his wrath from destroying them.“

Moses interceded again after the people refused to enter the Promised Land when the spies told them of the giants who lived there; once again God accepted Moses’s prayer and did not destroy them (Numbers 14–15).

After Moses, various prophets deliver a message of judgment to Israel, calling for repentance; they then turn to God and ask for mercy and postponed judgment, to give the people a chance to repent.

Jeremiah is so persistent that God has to tell him three times to stop interceding, since God can’t bring judgment if he keeps praying.

Later, God laments in Ezekiel 22:30 about the lack of prophetic intercession:

“I sought for anyone among them who would repair the wall and stand in the breach before me on behalf of the land, so that I would not destroy it; but I found no one.”

My study of lament psalms and the intercession of Moses and the prophets (along with my own personal experience of lament prayer) has led me to believe that that the God of the Bible values vigorous dialogue partners. This God invites us to approach the divine throne room with courage, expressing our genuine needs, including our complaints.

So the resounding question of my book is, Why didn’t Abraham do this? Why didn’t he bring his lament to God over the command to sacrifice his son? Why didn’t he intercede for Isaac?

In my next blog post (The Contrast between Job and Abraham), I’ll explain how the book of Job figures into all of this.

This is the ninth (and final) post about my UK speaking tour.

After giving eleven talks in the previous two weeks in Scotland and England, I traveled to Bristol to speak at Trinity College—my last stop before returning home via Heathrow airport.

My contact at Trinity College was Jamie Davies, Tutor in New Testament.

Jamie is the author of Paul Among the Apocalypses? An Evaluation of the “Apocalyptic Paul” in the Context of Jewish and Christian Apocalyptic Literature; Library of New Testament Studies (London: Bloomsbury T&T Clark, 2016).

He also wrote a sympathetic review of my book A New Heaven and a New Earth (2014) for the Review of Biblical Literature (published last year).

I first met Jamie at the 2014 Society of Biblical Literature meeting in San Diego. At the time he was a doctoral student at St. Andrews, studying with Grant Macaskill; but I met him because he was Tom Wright’s research assistant and the three of us had lunch together.

Jamie worked with Tom on PFG, the acronym they both use for Tom’s massive (1700 pages) two-volume work Paul and the Faithfulness of God (Fortress, 2013); Jamie worked on copy-editing and often had to track down missing footnotes and other references.

So there was a Tom Wright connection both at the start of my UK visit and at the end—full circle 1.

Presentations on Job and Eschatology

I did two presentations at Trinity College.

The first was an afternoon Research Seminar for faculty and postgraduate students, which focused on God’s second speech to Job from the whirlwind. My paper addressed what God was trying to communicate by reference to the monsters Behemoth and Leviathan; the paper is being published in the current issue of St. Mark’s Review (an Australian journal). 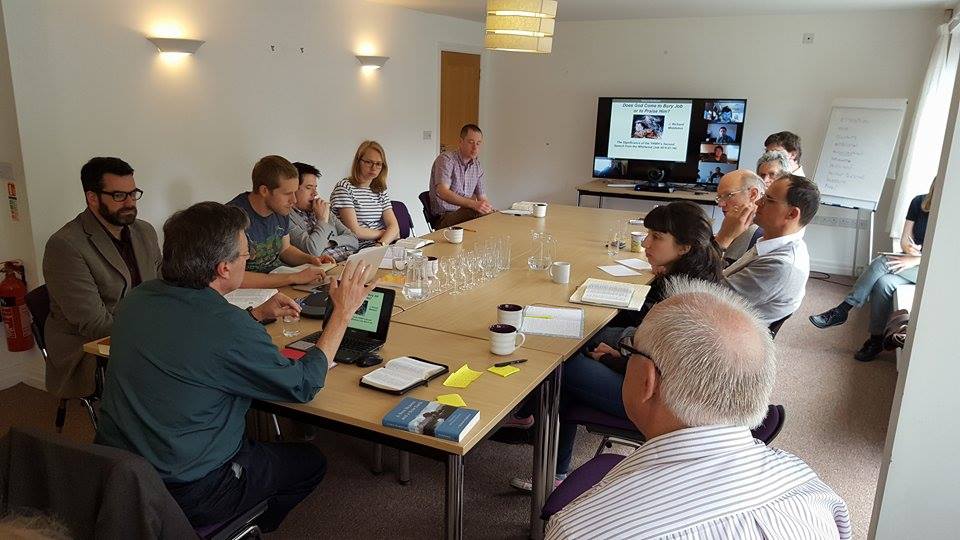 At the Seminar I met John Bimson, formally retired from being Tutor in Old Testament at Trinity College, but who still teaches a course on Job; he was a great dialogue partner and later shared with me one of his published papers on the monsters in Job, which articulated an interpretation very close to my own.

Later that evening I gave a public lecture on biblical eschatology, in essence summarizing the argument of A New Heaven and a New Earth. You can listen to the lecture here. 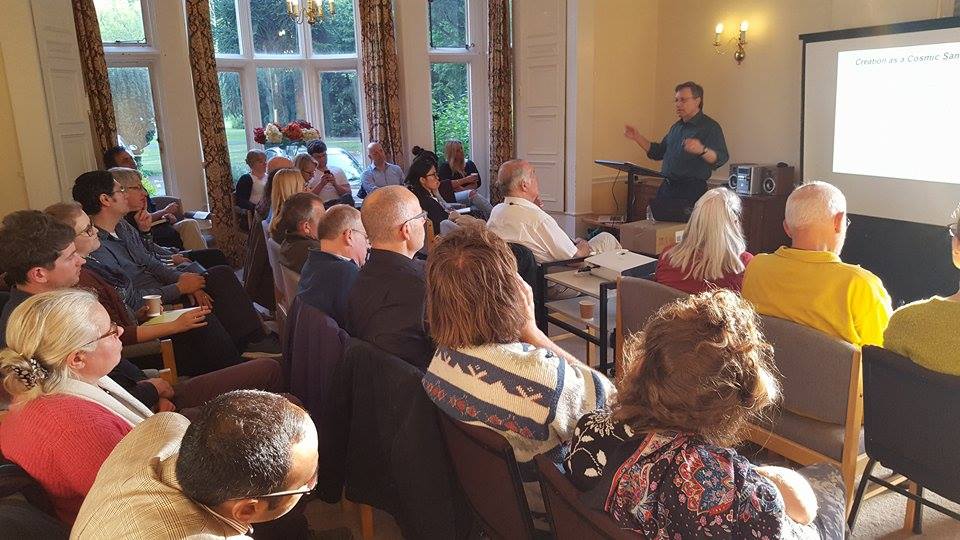 At least half the evening attendees came at the urging of Richard Russell (yellow shirt, above). I first encountered Richard by reading his MA thesis from Bristol University (called “The Growing Crisis of the Evangelical Worldview and Its Resolutions”) when I was doing my initial graduate studies at the Institute for Christian Studies in the nineteen-seventies.  Over the years Richard has been an Anglican priest, a philosophy teacher, and a bookseller; he brought an array of relevant books for sale during the evening event.

I first heard of Trinity College in Bristol when I was an undergraduate student at Jamaica Theological Seminary. During my B.Th. degree I attended a Keswick Convention in Kingston, Jamaica when J. Alec Motyer, then Principal and professor of Old Testament at Trinity, was the preacher.

It turns out that Motyer’s first speaking engagement outside of the UK was at a Jamaican Keswick Convention in 1964. I’m not sure how many times he spoke in Jamaica, but I heard him in the mid-seventies.

He did a series of expositions on Ezekiel 1–3 throughout the week of Keswick meetings, and these expositions were so inspiring that I have always credited them as one of the primary impetuses behind my growing desire to study and teach the Old Testament.

Beyond that, in my first year at JTS all the students were given a free copy of The New Bible Commentary: Revised (IVP, 1970), a one-volume Bible commentary edited by Motyer (along with three other biblical scholars). Although it has since been revised (there is a 21st Century Edition published in 1994), and is a somewhat predictable evangelical commentary, I found it to be a very helpful first reference work as a new undergraduate student.

When I first came to the UK to speak in 1997 at the invitation of David Hanson, I mentioned the importance of Motyer’s influence on me and David immediately phoned him up and put me on the line. I was able to thank Alec Motyer in person for his impact on my life and my sense of calling to Old Testament studies.

J. Alec Motyer (1924-2016) passed away the August before my second visit to the UK. His funeral was held September 2016 and Trinity College had a memorial service for him not long after I headed back to the States.

Perhaps the book Motyer was most proud of writing was A Commentary on Isaiah (IVP 1993), which he published in his retirement (he published some fourteen books after retiring!). As is typical of old-school evangelical scholars, he held firmly to the compositional “unity” of Isaiah, arguing that the entire book comes from the hand of the 8th century Isaiah of Jerusalem.

Almost all contemporary OT scholars (including evangelicals like myself) think it makes more sense to think that the oracles in chaps. 1-39 (with the exception of chaps. 24-27) are from the 8th century Isaiah; that chaps. 40-55 come from a prophet of the Babylonian exile who took up Isaiah’s mantle; and that chaps. 56-66 (and probably 24-27) are oracles from the post-exilic period, when Israel had returned to the land.

Beyond the three “Isaiahs,” there is clearly editing discernible throughout that weaves the entire book together. Despite its complexity, deriving from different historical periods, it is still the word of God, and constitutes a complex theological unity that speaks powerfully to our day.

At Motyer’s funeral, a story he sometimes told was recounted. He is reported to have said that when we get to heaven if you notice three men beating him up over in a corner, not to worry; their names are all “Isaiah” and he deserved it.

So, from hearing Alec Motyer speak as an undergraduate student in Jamaica, which fanned my love of the Old Testament, to myself speaking at Trinity College, where he used to teach—full circle 2.

Well, it was quite a trip; I got to speak to lots of different groups and I met old friends and made new ones. But I was very glad to get home, and even take a vacation!