Many Christians have been taught in church that it’s not proper to question God. In some cases, church members are criticized for even questioning their pastor. 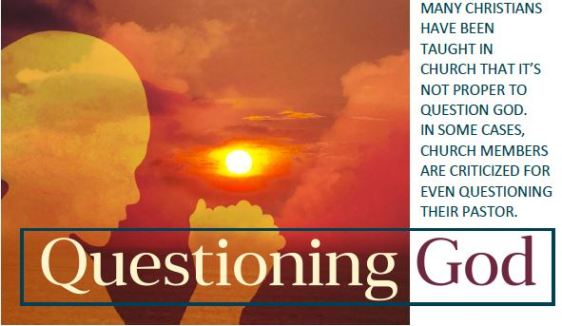 But the Psalms have a very different perspective—especially the psalms of lament or complaint, which comprise one-third of the Psalter (about fifty psalms). Over and over, various psalmists honestly bring their concerns to God, often in the form of critical questions.

Of course, we can ask questions in a very pious, subdued, and respectful way. Or, like many of the psalms, we can just throw our questions, audaciously, at God.

The Audacious Questioning of Lament Psalms

Perhaps the most famous is Psalm 22, which opens by asking: “My God, my God, why have you abandoned me?” No niceties, no “Dear God, I come to you in praise and thanksgiving.” Just an outrageous question, which is really an accusation.

Lament psalms are actually a form of prayer we are already familiar with; we usually call this supplication or petition. In such prayers we tell God about the problem that is bothering us (the complaint) and we ask for help (the petition).

They are not a polite form of supplication; they can be quite abrasive, even accusing God of being part of the problem. This is the point of the question addressed to God at the start of Psalm 22; and it is typical of lament psalms to voice their complaints in the form of rhetorical questions.

Likewise, the petitions go beyond what we might consider proper. One psalmist asks God to stop abusing him (“Remove your whip from me; / I am worn down by the hostility of your hand”; Psalm 39:10) and even to leave him alone, as if God’s very presence was oppressive (“Look away from me, that I may smile again”; Psalm 39:13).

But one of the most powerful—and daring—prayers of lament in the Bible is found not in the Psalms, but in the book of Jeremiah. Throughout the book, the prophet Jeremiah voices a series of lament prayers to God, culminating in the anguished prayer of chapter 20.

I recently spoke in chapel at Roberts Wesleyan College on Jeremiah’s prayer in Jeremiah 20:7–18; my secondary text was the 1986 song “Dear God,” from the British group XTC.

Jeremiah starts his prayer rather impiously by accusing God of deceiving him, and goes on to explain that God did not live up to his promises to support him as a prophet; his point is that despite God’s promises of protection (see Jeremiah 1:8 and 1:19), he has been persecuted for bringing God’s word to the people. At the end, he wishes that he had never been born.

The song “Dear God” is a secular analogue to Jeremiah’s prayer. The entire song is addressed to God (it is in the form of a prayer), and blames God for causing so much suffering in the world—and there’s quite a list of such suffering. The song ends with the singer telling God that he doesn’t believe in him.

My assigned topic for this chapel talk was: “Is it okay to question God?”

My short answer was and is that it is indeed permissible—not just to question God, but to challenge God. Maybe your pastor can’t handle that; but God certainly can.

In fact, the lament psalms and the prayers of Jeremiah teach us that God wants us to bring all the disorientation of our lives to him, to be brutally honest with him in prayer. And that was the focus of my chapel talk.

Ultimately, God took all the pain of the world into himself on the cross, to give us back redemption.

In comparison to that, what’s a little questioning?

If you’re interested, you can view my chapel talk on questioning God on You Tube.

8 thoughts on “Is It Okay to Question God?”