This is part 3 of a four-part post on my connections to N. T. Wright, the prolific New Testament scholar. For part 1, click here. For part 2, click here.

A Bunch of “Shout Outs” by Wright

Back in 1992, before Wright had achieved his present international stature, Brian Walsh and I were already excited by his work and quite taken with his newly-released The New Testament and the People of God, which he conceived as the first volume of a project entitled “Christian Origins and the Question of God.” We were therefore honored that Wright used our four worldview questions from The Transforming Vision as a tool for his analysis of first-century Judaism in that book (pp. 122-23). Brian is also mentioned in the preface, where Wright thanks him for his extensive feedback on the manuscript (p. xix).

We repaid the honor when we used Wright’s conception of the biblical story as a five-act drama and added a sixth act, in the last chapter of our book Truth Is Stranger Than It Used to Be (1995). In fact, our book is indebted to Wright’s ideas at numerous points. Wright then wrote an appreciative blurb for the cover of the British edition of the Truth is Stranger book (published by SPCK).

More recently, in the fourth and final volume (which is itself two volumes!), Paul and the Faithfulness of God (2013), Wright once more acknowledged his debt to the Walsh-Middleton analysis of worldviews (pp. 27-28).

I know this sounds like boasting; but I’m only just getting warmed up.

It was 1992 (or possibly 1993), soon after The New Testament and the People of God had been published. Brian Walsh and I were attending the annual meeting of the Society of Biblical Literature (SBL). It was lunchtime and we were wondering around one of the big hotels that hosted the SBL meetings. We were walking along the balcony of one of the upper mezzanines while looking down at the courtyard and there we saw Tom Wright giving a lecture to a group of scholars seated at tables having lunch. He looked up, interrupted his lecture, and called out: “There are my friends Brian Walsh and Richard Middleton!” Then he went back to his lecture. I was stunned.

Some years later at another SBL meeting (2009, New Orleans), Wright was giving an evening lecture on his new Justification book to a group of about 700 (the hall was packed). I was sitting beside Keith Bodner, an Old Testament scholar from Crandall University in New Brunswick. I had given a paper that afternoon on the role of humanity in Psalms 8 and 104 (plus another paper the previous day in a session Bodner chaired). I was beginning to relax, now that my “duties” were over. To my surprise, near the start of the lecture Wright made mention of my Psalms paper that afternoon and said he would like to have heard it since he was sure it would have been as helpful as my analysis of the imago Dei in The Liberating Image. At that point, Bodner leaned over incredulously and said: “You got a shout out from Tom Wright!?”

But I probably shouldn’t have been surprised. I had come to know Tom Wright as a generous person, who invests his time and energy in the building up of others. This goes well beyond his prodigious writing and speaking. After all, he had accepted my invitation to have dinner with a dozen of my past and current students the previous year, at the 2008 SBL in Boston. He and Maggie graciously spent an evening with our group, eating Italian food and engaging in stimulating and heart-felt conversations about Scripture, theology, and the church. 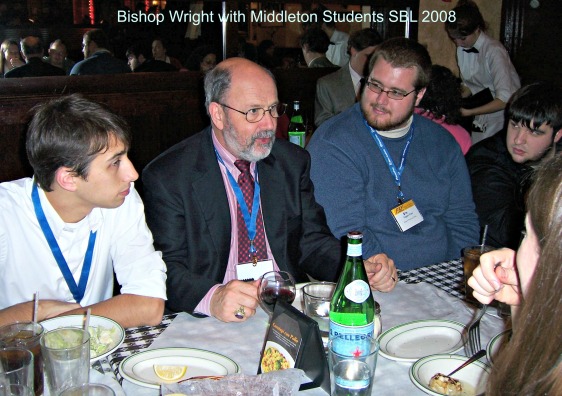 In part 4 of this post I’ll address the possibility that Walsh and Middleton affected Wright’s views of the redemption of creation.

This is part 2 of a four-part post on my connections to N. T. Wright, the prolific New Testament scholar. For part 1, click here.

My Introduction to Tom Wright

I first encountered Tom Wright when he was teaching New Testament at McGill University in Montreal (1981-1986) and I sat under his teaching soon after he moved to Oxford.

I was introduced to Wright by Brian Walsh, my friend and co-author. Brian was a Ph.D. student in philosophy of religion at McGill when Wright taught there, and they became fast friends. Brian later married one of Wright’s doctoral students at Oxford, Sylvia Keesmaat, who is today an accomplished New Testament scholar.

It was through Brian’s friendship with Wright that the Institute for Christian Studies in Toronto (where Brian was teaching and where I later did my Ph.D.) invited Wright to give a series of lectures in 1988 and again in 1989. The first was a five-part series on the Gospel of Mark (July 7-8, 1988), and the second was a three-part series entitled “The Quest for the Historical Kingdom” (January 31-February 1, 1989).

These lectures (which predated the 1992 publication of The New Testament and the People of God) were my first exposure to Wright’s innovative thinking on the gospels. These lectures stimulated my excitement about Jesus’ mission and message, especially their connection to the Old Testament and Judaism. I still have audio tapes of the lectures, as well as my copious notes. Wright’s narrative analysis of the Bible during these lectures greatly influenced my own exposition of the plot structure of the biblical story, which first shows up in chap. 6 of Truth Is Stranger Than It Used to Be (1995), then in my essay “A New Heaven and a New Earth” (2006), and as a separate chapter in my eschatology book (2014).

Wright is now a figure of international importance, both as one of the leading New Testament scholars today and as popular theologian and teacher of the worldwide church. A recent issue of Christianity Today, which has Wright’s picture on the cover, suggests that he is comparable only to C. S. Lewis in the extent of his influence.

In part 3 of this post I’ll comment on a few ways in which Wright has used and acknowledged of the work of Walsh and Middleton.

This is part 1 of a four-part post on my connections to N. T. Wright, the prolific New Testament scholar.

Many people have observed the similarity between my teaching on eschatology and Tom Wright’s position on the subject. Both Wright and I affirm the redemption of creation (a new heaven and a new earth) as the core biblical teaching on the expected future, in contrast to popular ideas of an otherworldly destiny in an immaterial “heaven.”

When I first came to understand the New Testament’s vision of the redemption of creation as the climax of God’s purposes, and then started teaching on the subject, I was an undergraduate theological student in Jamaica. That was back in 1976 and I had never heard of Tom Wright.

There were a number of influences on my thinking at the time, none more important that George Eldon Ladd’s The Pattern of New Testament Truth (1968). Ladd contrasted the dualism of Plato’s worldview (with its goal of ascent to a heavenly world) with the biblical vision of God’s coming from heaven to earth to redeem earthly life. Ladd then illustrated different ways this biblical vision was articulated in the Synoptic Gospels, in the Johannine literature, and in Paul.

Beginning in 1979, soon after I moved to Canada, I began teaching non-credit courses on the topic of a Christian worldview in a variety of campus ministry settings at different Ontario universities. This was an outreach program to Christian university students developed by Brian Walsh through the Institute for Christian Studies in Toronto. Brian also taught some of these courses.

The point of these courses was to help Christian students live a more integrated life. Through communal reflection on Scripture, theology, western intellectual history, and contemporary culture, along with exploring a sense of vocation in God’s world, many of our students were impelled to be more intentional about their discipleship. They were encouraged to connect their academic studies and participation in society with their Christian faith. This meant breaking down the sacred/secular split that most Christians have internalized, since this unbiblical dualism leads to a compartmentalized faith, which cripples the church’s witness to the coming of God’s kingdom in this world.

Although we had slightly different emphases in our courses, Brian and I were united in grounding all our “worldview” teaching in God’s desire to redeem creation. Our shared approach to the subject led us to co-author The Transforming Vision in 1984, which further developed our views on the subject, especially in Chap. 5: “Transformed by Redemption” and Chap. 6: “The Problem of Dualism.”

After that book, the redemption of creation continued to be a major theme of my teaching in campus ministry settings, not only in Canada, but also in the U.S. And this theme was central to my formal teaching as well, at both undergraduate and graduate institutions, in both countries.

For many years, undergraduate students at Roberts Wesleyan College would refer to my “strange views” on eschatology, as if they were distinctive to me. Although I assigned readings by other authors with a similar point of view, few of these readings were by biblical scholars and the biblical scholars I assigned weren’t that accessible to non-specialists. I was therefore delighted when Tom Wright began publishing his views on the subject, especially his popular Surprised by Hope (2008). Suddenly, my views were no longer quite so idiosyncratic. I was in good (scholarly) company.

In part 2 of this post I’ll explain when I first encountered Wright and how he began to influence my thinking.